McKayla Pinsker was retrieving the Christmas decorations from her mid-century home when she noticed the odd item on a shelf in the dark. 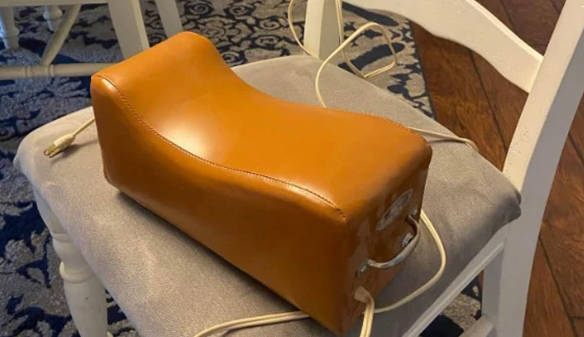 She and her husband Lucas have lived in the property for five years but had never noticed the "Vibra Slim".

The pair burst out laughing when they realised it was probably an early sex toy that the previous owners had left behind.

McKayla, from Illinois, US, shared a photo of the sex toy in a Facebook post and wrote: "Last year we were getting out Christmas decorations from our basement. 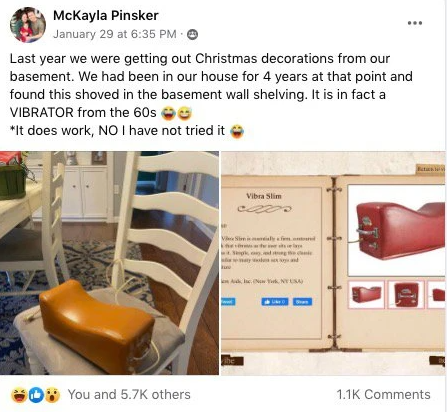 She added: "My house was built in 1960 and had the same owners from the time it was built until we bought it in 2016.

"I have no idea how it wasn’t found before.

"We have built-in shelves in the basement and we store Christmas decorations and other stuff we don’t use often down there, so we had been in and out of there plenty of times.

"My husband is the one who found it and said it was shoved between a gap between the shelving.

"He said it definitely seemed like it was hidden there."

Another wrote: "Now THIS is a piece of history!!"

Many wondered how it was used as a sex toy.

One person wrote that she was convinced it was a neck massager, to which one commenter replied: "If your neck is on your vagina, then yes."

One Facebook user commented with a similar story, writing: "Okay so I found one of these in my grandpa’s closet when I was like 10 and thought it was an old motorcycle seat or something.

"I remember him getting super embarrassed and grabbing it from me. Now I know why."